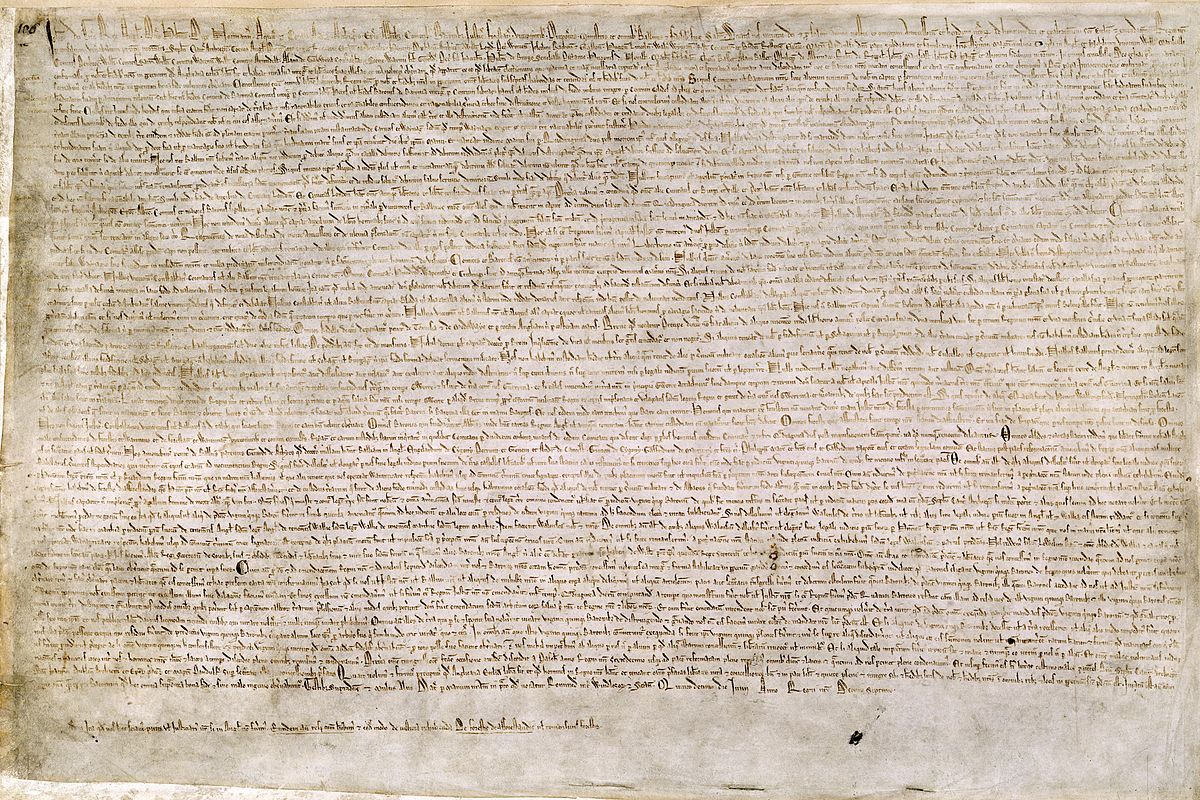 This activity focuses on one of the major primary sources of British history, 1215 Magna Carta. The questions are designed to help students grasp the meaning and significance of the text, in order for them to be able to write an introduction to a commentary of the document. Answers to the questions are not provided here – message me if you would like to have them – but I provide an example of introduction below.

Instructions: Read the following text, look up the vocabulary, answer the following questions and then write an introduction to a commentary on the document.

JOHN, by the grace of God King of England, Lord of Ireland, Duke of Normandy and Aquitaine, and Count of Anjou, to his archbishops, bishops, abbots, earls, barons, justices, foresters, sheriffs, stewards, servants, and to all his officials and loyal subjects, Greeting. KNOW THAT BEFORE GOD, for the health of our soul and those of our ancestors and heirs, to the honour of God, the exaltation of the holy Church, and the better ordering of our kingdom, at the advice of our reverend fathers Stephen, archbishop of Canterbury, primate of all England, and cardinal of the holy Roman Church, Henry archbishop of Dublin, William bishop of London, Peter bishop of Winchester, Jocelin bishop of Bath and Glastonbury, Hugh bishop of Lincoln, Walter bishop of Worcester, William bishop of Coventry, Benedict bishop of Rochester, Master Pandulf subdeacon and member of the papal household, Brother Aymeric master of the knighthood of the Temple in England, William Marshal earl of Pembroke, William earl of Salisbury, William earl of Warren, William earl of Arundel, Alan of Galloway constable of Scotland, Warin fitz Gerald, Peter fitz Herbert, Hubert de Burgh seneschal of Poitou, Hugh de Neville, Matthew fitz Herbert, Thomas Basset, Alan Basset, Philip Daubeny, Robert de Roppeley, John Marshal, John fitz Hugh, and other loyal subjects:

(9) Neither we nor our officials will seize any land or rent in payment of a debt, so long as the debtor has movable goods sufficient to discharge the debt. (…)

(20) For a trivial offence, a free man shall be fined only in proportion to the degree of his offence, and for a serious offence correspondingly, but not so heavily as to deprive him of his livelihood. (…) None of these fines shall be imposed except by the assessment on oath of reputable men of the neighbourhood.

(24) No sheriff, constable, coroners, or other royal officials are to hold lawsuits that should be held by the royal justices.

(25) Every county, hundred, wapentake, and tithing shall remain at its ancient rent, without increase, except the royal demesne manors.

(28) No constable or other royal official shall take corn or other movable goods from any man without immediate payment, unless the seller voluntarily offers postponement of this.

(30) No sheriff, royal official, or other person shall take horses or carts for transport from any free man, without his consent.

(35) There shall be standard measures of wine, ale, and corn (the London quarter), throughout the kingdom. There shall also be a standard width of dyed cloth, (…) Weights are to be standardised similarly.

(38) In future no official shall place a man on trial upon his own unsupported statement, without producing credible witnesses to the truth of it.

(39) No free man shall be seized or imprisoned, or stripped of his rights or possessions, or outlawed or exiled, or deprived of his standing in any way, nor will we proceed with force against him, or send others to do so, except by the lawful judgment of his equals or by the law of the land.

(40) To no one will we sell, to no one deny or delay right or justice.

(42) In future it shall be lawful for any man to leave and return to our kingdom unharmed and without fear, by land or water, preserving his allegiance to us, except in time of war, for some short period, for the common benefit of the realm. (…)

(45) We will appoint as justices, constables, sheriffs, or other officials, only men that know the law of the realm and are minded to keep it well.

(48) All evil customs relating to forests and warrens, foresters, warreners, sheriffs and their servants, or river-banks and their wardens, are at once to be investigated in every county by twelve sworn knights of the county, and within forty days of their enquiry the evil customs are to be abolished completely and irrevocably. (…)

(49) We will at once return all hostages and charters delivered up to us by Englishmen as security for peace or for loyal service.

(52) To any man whom we have deprived or dispossessed of lands, castles, liberties, or rights, without the lawful judgment of his equals, we will at once restore these. In cases of dispute the matter shall be resolved by the judgment of the twenty-five barons referred to below in the clause for securing the peace (§61). (…)

(54) No one shall be arrested or imprisoned on the appeal of a woman for the death of any person except her husband.

(55) All fines that have been given to us unjustly and against the law of the land, and all fines that we have exacted unjustly, shall be entirely remitted or the matter decided by a majority judgment of the twenty-five barons referred to below (…)

(56) If we have deprived or dispossessed any Welshmen of land, liberties, or anything else in England or in Wales, without the lawful judgment of their equals, these are at once to be returned to them. (…) The Welsh shall treat us and ours in the same way.

(58) We will at once return the son of Llywelyn, all Welsh hostages, and the charters delivered to us as security for the peace.

(59) With regard to the return of the sisters and hostages of Alexander, king of Scotland, his liberties and his rights, we will treat him in the same way as our other barons of England, (…)

(60) All these customs and liberties that we have granted shall be observed in our kingdom in so far as concerns our own relations with our subjects. Let all men of our kingdom, whether clergy or laymen, observe them similarly in their relations with their own men.

(61) SINCE WE HAVE GRANTED ALL THESE THINGS for God, for the better ordering of our kingdom, and to allay the discord that has arisen between us and our barons, and since we desire that they shall be enjoyed in their entirety, with lasting strength, for ever, we give and grant to the barons the following security : The barons shall elect twenty-five of their number to keep, and cause to be observed with all their might, the peace and liberties granted and confirmed to them by this charter. If we, our chief justice, our officials, or any of our servants offend in any respect against any man, or transgress any of the articles of the peace or of this security, and the offence is made known (…) the said twenty-five barons (…) may distrain upon and assail us in every way possible, with the support of the whole community of the land, by seizing our castles, lands, possessions, or anything else saving only our own person and those of the queen and our children, until they have secured such redress as they have determined upon (…) they may then resume their normal obedience to us. (…)

(63) IT IS ACCORDINGLY OUR WISH AND COMMAND that the English Church shall be free, and that men in our kingdom shall have and keep all these liberties, rights, and concessions, well and peaceably in their fullness and entirety for them and their heirs, of us and our heirs, in all things and all places for ever. Both we and the barons have sworn that all this shall be observed in good faith and without deceit. Witness the abovementioned people and many others. Given by our hand in the meadow that is called Runnymede, between Windsor and Staines, on the fifteenth day of June in the seventeenth year of our reign.

Proposed introduction to a commentary:

Magna Carta was signed by King John at Runnymede on the 15th of June 1215. The barons had rebelled against the king because he was abusing the system of absolute monarchy / the feudal system. It was signed after five days of intensive discussions and negotiations during which the barons established new rights and tried to balance the power of the king and the power of the nobles.

The text consists of 63 clauses / articles which specify the rights granted to the barons. This piece of legislation / legislative text forms the basis of the parliamentary monarchy.

The main provisions of the text are the right to justice and the right to private property. On the part of the king, he is forced to abide by / to obey the law.